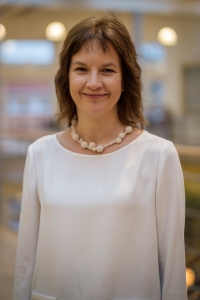 Leelo Keevallik is a Professor in Language an Culture at Linköping University. She has a PhD in Finno-Ugric linguistics and has been working on the sociolinguistics, phonetics and interactional grammar of spoken Estonian. Her current research targets embodied interaction in various settings, such as dance and pilates classes, and collaborative physical work in multilingual companies. Her recent overview article What does embodied interaction tell us about grammar? (2018) problematizes the boundaries of language, and she is now focusing on vocalizations at the edge of lexicon: pain cries, strain grunts, and those expressing what a dance move feels like.

Emily Hofstetter is a Research fellow/Biträdande universitetslektor at Linköping University. She received her PhD from Loughborough University, examining how constituents and politicians discuss local concerns. She is a CARM Associate, and her past work has examined several applied options for sociolinguistic research. She is now focusing on the fundamentals of language, specifically non-lexical vocalizations in a variety of settings. For the project, she is primarily examining board gaming and rock climbing activities, and how non-lexicals support play, competition, and sociality. For more information on conversation analysis, see her Youtube videos.

Agnes Löfgren currently holds a PhD position at Linköping University. She has a bachelor in Linguistics and French, and a master in Speech and Language Pathology, both from Uppsala university. She also has a background in music. During her studies, she has taken an interest in the pragmatics of language, extra- or para-linguistic phenomena, neurolinguistics and cognition as well aesthetic expression. Her contribution to the project concerns interaction in artistic contexts, focusing on the relationship between aesthetic and linguistic expression.

Hannah Pelikan is a PhD student at the Graduate School in Language and Culture in Europe at Linköping University, Sweden. Her research focuses on non-lexical vocalizations uttered by robots. She has a background in cognitive science and human-computer interaction and has investigated how humans adapt to the limited interactional abilities of a NAO robot and how the DaVinci surgical robot reconfigures teamwork in the operating room during her bachelor and master studies. Hannah is particularly interested in how humans orient to non-lexical vocalizations produced by a robot and how this interplays with a robot’s embodied conduct. She is currently exploring interaction with a Cozmo robot and plans to study non-lexical vocalizations in robots of various sizes and morphologies during her PhD. 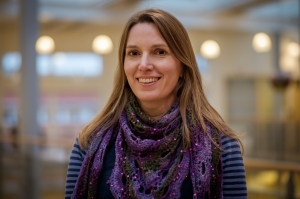 Sally Wiggins is an Associate Professor (aka Reader) in Psychology at Linköping University in Sweden. Her research interests focus on social interaction and discursive psychology, examining the ways in which embodied practices (such as eating, food preferences and gustatory pleasure) are enacted and become consequential in social contexts. For more on discursive psychology, see her textbook. For the project, she is analysing non-lexical vocalisations in family mealtime interaction, such as use of the gustatory ‘mmm’, lip smacks and disgust markers.

Kätlin Aare is a PhD student in the Phonetics Lab at the University of Tartu, Estonia, and a visiting researcher in the Phonetics Lab at Stockholm University, Sweden. She holds a master’s degree in Linguistics from Stockholm University and is a board member of the International Speech Communication Association’s Student Advisory Board. Her PhD project focuses on breathing during spontaneous conversations. Of particular interest are the functional use of resources for speech – air, namely – in the service of realising communicative intentions, and hidden events in conversational turn-taking, both investigated on the basis of physiological cues in the breathing signal.